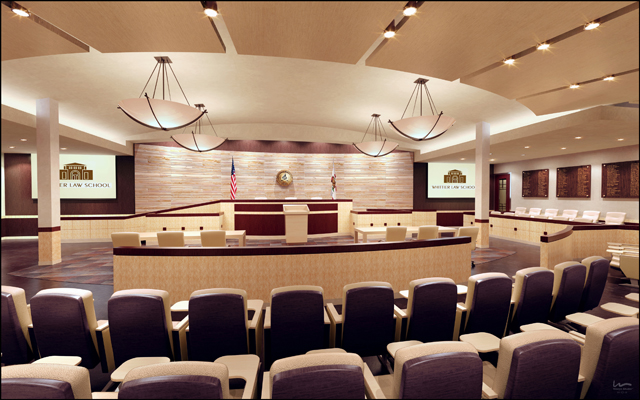 With severe budget reductions drastically affecting the efficiency and effectiveness of California’s court system, one area law school is combating the cutbacks by offering its new $2-million practice courtroom on campus as an official legal venue.

The state-of-the-art facility, which opened last month is named after Whittier graduate Paul Kiesel, senior partner with Kiesel + Larson LLP, who serves as co-chair of the Open Courts Coalition a bipartisan group of lawyers actively lobbying Gov. Jerry Brown and the legislature to reverse the cuts made to the state’s courts.

“In the last five years, the courts’ budget has been cut by $1 billion,” Kiesel, told the Los Angeles Times, adding that the cutbacks have resulted in a backlog of 20,000 personal-injury cases in Los Angeles County alone.

Calling it “uncharted territory,” Kiesel said he hopes to ease the stress on the financially burdened court system by hosting public proceedings at the private school.

“It should quite frankly be in a public courthouse,” Kiesel told the Times. “But the way our budget funding is going, it may be that law schools are going to be providing the basic services.”

School officials say they plan to contact judges and attorneys to offer the space for an unspecified contingency fee, an arrangement that could benefit the legal community and Whittier’s students by allowing them to observe actual legal proceedings.

“Students cannot only practice in the new courtroom, but they will be able to observe actual trials without having to leave the campus,” said Penelope Bryan, Whittier’s dean.