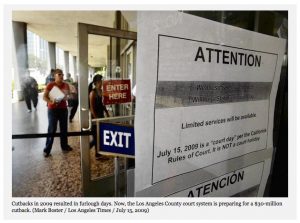 Screen grab of photo from latimes.com article. Click to enlarge.

The Los Angeles Times reports today that the Los Angeles County Court System is facing a $30 million budget cut that over the coming months will result in layoffs, courtroom closings and the shutdown of a juvenile court program.

The latest reductions will shutter 56 courtrooms and eliminate 350 employees, and follow an initial $70 million already slashed from the budget this fiscal year.

Court reporters will no longer be provided for civil trials and the courts will pare back their use in motions hearings, meaning litigants will have to hire their own transcribers if they want to record testimony.

The cuts comes as California’s judicial budget, which has been pared back in recent years as the state struggled economically, faces the potential loss of tens of millions of dollars in 2013 if a tax measure on the November ballot fails.