First In A Series: An Ounce Of Prevention 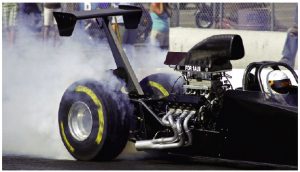 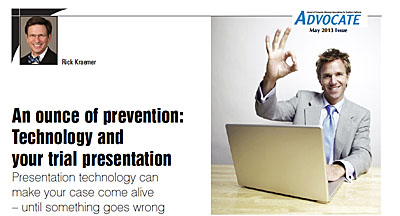 With the upcoming annual Consumer Attorneys Association of Los Angeles (CAALA) Convention — the largest trial lawyer convention in the nation — scheduled to take place beginnning August 29 in Las Vegas (and Executive Presentations proudly exhibiting there in Booth No. 308), we decided in the next few weeks leading up to that event to serve up segments online of an article on trial presentation technology by our Rick Kraemer that appeared in the May 2013 issue of CAALA’s Advocate magazine.

Titled “An Ounce of Prevention,” Rick takes an in-depth look at how the available technology can make — or potentially break — a lawyer’s case, and he starts it off by recalling a recent exclusive visit to the world-famous Jet Propulsion Lab and how a conversation with one of the fastest men on the planet, National Hot Rod Association (NHRA) Full Throttle Drag Racer Dave Grubnic, led Rick to draw comparisons between his professional experience and the racing champion’s:

I recently received an invitation from Bob Girardi (Tom and Jack’s brother) to attend a private tour he had arranged at the Jet Propulsion Laboratory in Pasadena.  Among the guests was Bob’s friend “Aussie” Dave Grubnic, a professional NHRA Full Throttle Drag Racer who was in Los Angeles to compete in the Winter National Races held in Pomona.

Since I’ve been a racing fan for as long as I can remember, the opportunity to talk with Grubnic was a tremendous honor. (If you’re not familiar with Full Throttle Drag Racing, the gist is that Grubnic routinely races cars reaching speeds of over 325 mph in less than four seconds.)

“How does it feel to be behind the wheel of a car going that fast?” I asked. Grubnic responded with a big smile and said, “When everything is going like it’s supposed to, it’s great.  But knowing what to do when things go wrong — well, that’s what will save you from a horrific crash that could cost you your life.”

Granted, I’m no drag racer, but I found myself drawing a parallel to my own professional experience using technology to support attorneys with their trial presentations.  When you’re using technology and everything is working like it’s supposed to, things are great.  Likewise, when something goes wrong, knowing how to react to an unexpected glitch, while certainly not life threatening, is critical. After working with thousands of attorneys for more than 26 years, my team and I have encountered our share of the inevitable pitfalls associated with the use of technology, and we’ve amassed a breadth of knowledge, along with common sense strategies, on how to resolve and prevent them.

Like most attorneys, when you’re in trial you probably prefer things to unfold according to plan.  And when the plan works, technology can help your case immeasurably.  However, at one time or another you’ve probably had something go wrong in trial, leaving you scrambling to make sure that the hiccup didn’t disrupt the whole flow of your presentation. And it’s not only the presentation equipment itself that you have to worry about; technology (from software versions to hardware capacity, and everything in between) also affects the quality of the materials (exhibits, video, and graphics) that you are presenting to support your case.

When it comes to using technology in trial, it’s wise to plan ahead in order to prevent glitches, as much as possible, from happening to begin with. It’s also important to be able to calmly troubleshoot problems that do arise; losing your composure can leave the judge annoyed or the jury confused. Inevitably, mistakes do happen, technology does fail, and as a result, we’ve all had some experience in having to react when things go wrong. But that doesn’t mean that we shouldn’t try our hardest to prevent problems before they arise.

In the coming weekly posts, Rick will share his tips on how to prepare the best trial, video and graphics presentations for your case, and how to prevent technology problems before they happen. Next Thursday: computer systems, components, and software.