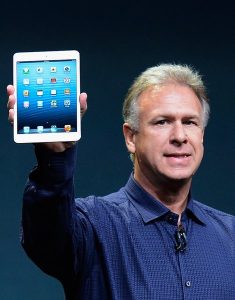 Hot on the heels of Microsoft officially putting a $499 starting price tag on its upcoming Surface tablet, Apple has now debuted its new iPad Mini, the long-rumored subcompact version of its game-changing iPad.

“It’s as light as a pad of paper,” said Apple’s marketing chief Phil Schiller, at the invitation-only release event taking place this morning.

The iPad mini will be available for pre-order on October 26. The WiFi version will go on sale Nov. 2 while cellular versions of the device will arrive two weeks later. The Wi-Fi model features 16Gb of storage.

The iPad Mini is positioned to compete with Amazon.com’s Kindle Fire HD and the Google Nexus 7, smaller and cheaper devices that appeal to on-the-go consumers who don’t want to shell out for the pricey iPad.